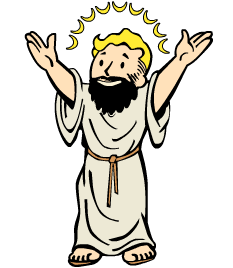 When it came to Jairus’ daughter, for the sake of his peace of mind, Jesus euphemistically reported that the girl was simply sleeping.

No such claim could be made in the case of the widow’s son at Nain. Here, the dead man was obviously dead, and he was being carted toward his tomb.

The man’s mother was incredibly distressed, as he was her only son and was a widow to boot. In those times, upon becoming a widow, the woman’s well-being became the responsibility of the oldest son – in this case, the only son.

Who was now dead.

What was the woman to do? Along with the pain of losing her husband, and now her only son, her livelihood was in jeopardy.

Understandably, she was distraught.

As Jesus was passing by, He did what He always does when He witnesses pain and suffering or hurt and heartbreak: He showed compassion.

He touched the wound, spoke the words, and brought the dead man back to life.

Many wonder why God lets the innocent die and get mad when misfortune rears its ugly head.

But the anger and blame need to be directed at Satan, not God.

God’s will is life and love; Satan’s will is death and destruction.

Many people, knowingly or not, dance to Satan’s tune and become his puppet or pawn. He is a liar by nature, and a crafty one at that. Indeed, Satan is the “father of lies.” (John 8:44)

But know this: Satan can only take life; only God can give it.

Trust in God to protect and provide so that you may persevere and prevail. Choose to follow His path, which prepares you for His purpose, promotes His peace, and presents His presence.

This site uses Akismet to reduce spam. Learn how your comment data is processed.

Donate via Cash App and enjoy a special one-time offer